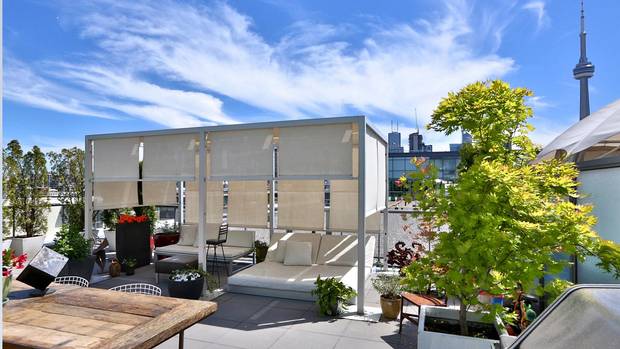 The Action: At the Thompson Residence, this custom two-bedroom corner penthouse outshone all other units. The sellers relocated for one week to accommodate showings for 50 buyers mid-June. (It was the Globe’s Home of the Week in the June 9 edition.) By the time the owners returned, there was a solid $1.2-million offer on the table, which was readily accepted.

What They Got: Attached to a popular hotel is a section of private residences, including this 1,211-square-foot unit the owners bought as a raw space from builder and former neighbour, Peter Freed, circa 2010.

Floor-to-ceiling windows encase the suite, which was customized with high calibre appointments, such as Molteni&C built-ins in the living room and master bedroom, as well as a Boffi kitchen with an island, seamless cabinetry and integrated Gaggenau, Boffi and Sub-Zero appliances.

An 800-square-foot terrace with a cabana is located off the central dining room.

The Agent’s Take: “This was quite rare because almost all the units have balconies, but there are only six units with terrace of this size,” says agent Christopher Bibby.

“[The sellers] would flood the terrace space in the winter and construct a skating rink for his boys to go out and play hockey, so it really was a year round space for them. That’s something I’ve never really seen.”

Though this penthouse was extremely personalized as the only suite sold as an empty space, it was fashionable and functional for various demographics.

“[The sellers] design their own plan for themselves and chose all of their own finishes, so nothing in there was a builder finish. It’s truly one of a kind, the kitchen on its own was $100,000, everything was top of the line,” Mr. Bibby adds.

“Even though it is an extremely vibrant neighbourhood and there is a nightlife aspect to it, my clients would use the pool on Saturday mornings with their boys and have brunch in the bistro below, so there’s something for everyone.”