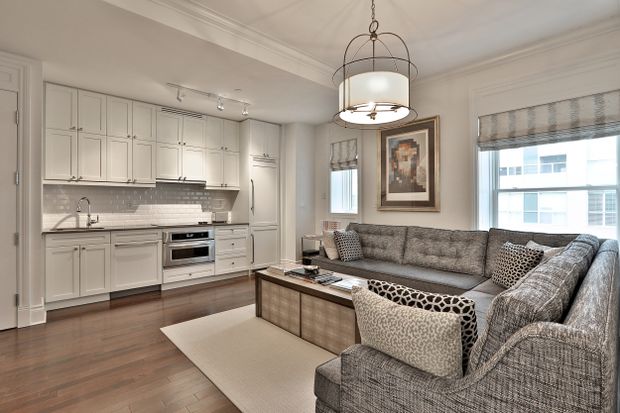 Days on the market: Five

The action: In March, this one-bedroom corner suite quickly caught the eye of more than a dozen parties keen on residing in a wing of the historic King Edward hotel in downtown Toronto.

“Units in there don’t come up too often and it’s a very unique space, so a lot of people were drawn in by curiosity [and the chance of] being connected to an iconic and landmark hotel,” agent Christopher Bibby said .

“And the price point is very reasonable, especially for the area.”

What they got: In 2013, a retail wing of the more than century-old hotel was converted into condominium residences, including this 695 square-foot suite with 10-foot ceilings.

The interior has upscale finishes, such as hardwood floors, a marble-clad bathroom and panelled kitchen appliances matching the cabinetry. Walls around a den were removed to enlarge the principal room.

The unit comes with laundry facilities and a locker. Monthly fees of $768 pay for water and heating, concierge, gym and media rooms.

The agent’s take: “There is the cachet of being in a hotel. You can enter through the hotel lobby and have access to hotel amenities,” Mr. Bibby said.

“But if you didn’t want to enter through the hotel lobby, there is a private entrance off Leader Lane on the east side.”

This unit also fuses the best of old and new. “The quality of construction of these older buildings is substantially better than new builds,” Mr. Bibby said.

“[The sellers] opened up the den … so by reconfiguring the space, it made it so much more efficient.”