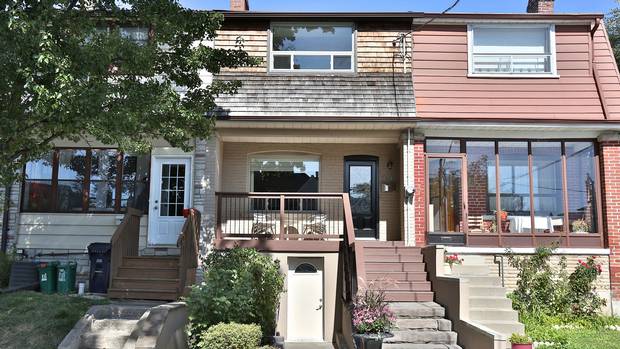 The Action: This two-storey townhouse is one of the only properties without parking on a street that’s also home to Artscape Wychwood Barns, but that was no deterrent for 60 shoppers and another 100 attendants at two open houses. Like other residences sold in the area, it wound up in the centre of a bidding war, this time between five participants.

What They Got: The framework of this 1,600-square-foot residence took shape on a 15-by-73-foot lot around 1920. But a past owner – and interior designer – redressed it, complete with new roofing, windows, doors and mechanics added about six years ago.

The living and dining area is open-concept with hardwood floors and clear passage into a kitchen appointed stainless-steel appliances, full-height cabinetry and a back door to a multitiered deck and private garden.

The top floor encompasses three bedrooms, including one with a balcony, and another with one of four bathrooms.

Floors are heated in the recreation and guest rooms in the basement, which as a separate front entrance.

The Agent’s Take: “We’re not seeing a lot of inventory now, especially in the freehold side under $1-milllion and especially anything turnkey,” agent Christopher Bibby says. “A lot of the properties are detached and semi-detached, so we didn’t have a lot of row houses to work off of.”

The strength of this townhouse lies in its style and setup. “A lot of buyers coming through thought my clients did the renovation because it’s timeless and very modern,” Mr. Bibby adds.