Home of the Week: A condo that sparkles at night 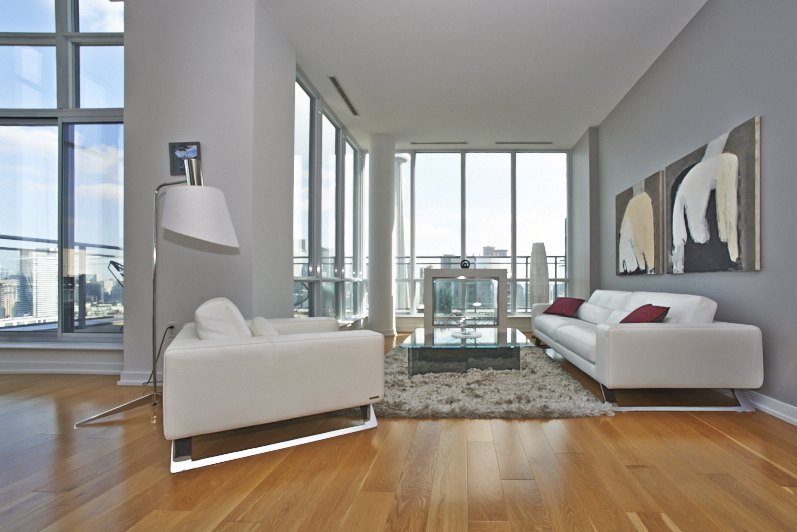 1,200 square feet of space and an expansive terrace, 48 storeys up

Dr. Vladislav Miropolsky and his wife were relocating from British Columbia to Ontario in 2009 when they decided to buy a penthouse unit at 15 Fort York Blvd. in Cityplace.

They would have a house outside of Toronto but they also wanted pied-à-terre in the city.

“We wanted something special. Somewhere we could stay on weekends and holidays,” says Dr. Miropolsky.

The couple was having trouble finding a place with style and character for less than $1-million. Then they visited this unit on the north-east corner of the 48th floor.

“When we looked at this one it took our breath away,” says Dr. Miropolsky.

The unit, which is approximately 1,200 square feet, provides large living and dining areas on one side, and two bedrooms with two bathrooms on the other. It is one of four penthouses on that level. Ceilings are 11 feet high in some areas and soar to 14 feet high.

“You’re living up in the sky,” says the doctor. “It’s such an uplifting ceiling. The view makes your mood for the day. In the early morning you see the sun across the whole downtown like a red sliver.”

Real estate agent Christopher Bibby of Sutton Group Associates Realty Inc. points out that the city views extend to Mississauga’s Marilyn Monroe towers in the west and as far as the high-rises at Yonge and Eglinton to the north.

“It’s nice being on a corner because every room has a different perspective,” says Mr. Bibby.

Mr. Bibby says he expects buyers will be drawn to the views, the terrace and the finishes, which either are not available or would cost far more in towers such as the Ritz-Carlton and the Shangri-La, where residents also have hotel amenities.

“It’s not common to find this type of space in those buildings,” he says. “Right away you’re talking over $1-million.”

The kitchen has Viking appliances, including an oversized stainless steel refrigerator, a range and an under-the-counter wine fridge. Counter tops in the kitchen are made of a black granite called “matrix motion.”

“At night it sparkles when electrical lights hit it.”

Dr. Miropolsky asked the developers to replace the bathtub in one of the bathrooms with a very tall shower enclosure.

The doctor says he also enjoys the complex, which includes another tower and some townhouses arranged around a courtyard.

“It has a little bit of a family feel because there are some kids living in those townhouses.”

The complex also has a swimming pool, gym facilities and a 27th-floor party room with a restaurant-style kitchen.

Dr. Miropolsky favours the spacious outdoor terrace, which provides views of the city, CN Tower, Rogers Centre and Lake Ontario from 48 floors up.

“The night view is even more spectacular,” he says, because of the city lights.

The terrace is also quiet because it’s so high above the ground, he adds. At sunset, the sun reflects off of the glass in the buildings downtown.

Dr. Miropolsky and his wife often meet friends in the King Street West area. After dinner, the group usually extends the evening on the terrace at Fort York Boulevard.

“Everyone wanted to end up on our patio.”