Home of the Week: Cabbagetown reno with a tender touch 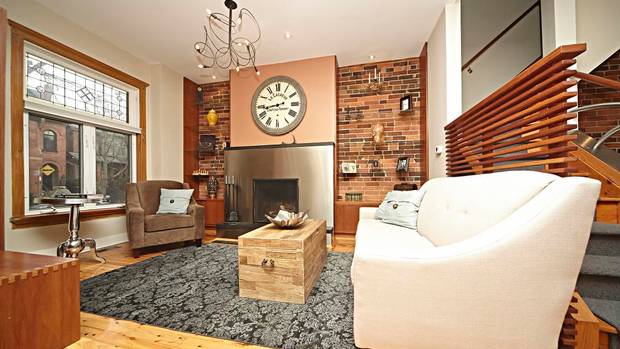 Chris Shaw was a single guy exploring Cabbagetown and hanging out at the neighbourhood’s annual festival when he stumbled across an “open house” at a semi-detached red brick Victorian on Wellesley Street East.

“I was definitely not in the market for a four-bedroom house at the time,” he says.

Mr. Shaw was also repelled by the exterior, which had an aluminum door and mid-century porch stuck on the front. But he ventured inside and found the interior had all of the character the exterior lacked.

A previous owner had opened up the main living area to create a modern house while preserving many of the original period details.

“They blended the modern with the old versus just putting a brand new house inside.”

The polished heritage plaque which now hangs beside the front door reveals that the original owner of the circa 1902 house was Thomas E.B. Yates and he was a clerk.

The plaque also states that the architect was the notable Charles Gibson, who also designed churches, schools and houses throughout the city.

The main living area of the house has been opened up to create a living room open to the dining room. A new modern staircase with teak millwork leads to the upstairs and creates separation between the spaces.

The living room has been stripped of Victorian plaster and embellishments to create a modern space with a wood-burning fireplace and exposed brick wall. A reminder of the home’s past can be found in the stained glass above the front window.

At the rear of the house, a modern kitchen with maple wood cabinets has sliding doors leading to a terrace. The original butler’s stairs lead to the second floor.

“They’re super-handy to have and it’s kind of a nice feature of an old house,” says Mr. Shaw.

The master bedroom is on the second floor at the front of the house. Built-in closets provide lots of storage and an ensuite bathroom with walk-in shower is hidden behind a sliding wooden door.

Even the basin is made of wood.

That floor has two other bedrooms and a bathroom with air-jet tub.

The third floor has a large family room and a separate office.

Downstairs, the house has a recreation room and a wine cellar, which stands behind some reclaimed barn doors that Mr. Shaw had shipped over from Europe.

Mr. Shaw enjoys the neighbourhood and the village feeling on Parliament Street. He also walks to his job in the financial district.

“I work at Bay and Front and I walk to work every day of the year,” says Mr. Shaw.

Mr. Shaw and his fiancée, Camilla Bartosiewicz, enjoy spending summer evenings on the large rooftop deck outside of the third-floor family room.

The vistas extend from the treetops to the downtown skyline and the CN Tower.

“The view of the city is unbelievable,” he says.

Cabbagetown is protected under heritage regulations so new high-rise towers are unlikely to spring up nearby, says Mr. Shaw.

“There will never be anything that can block that view.”