Home of the Week: A former factory branches out 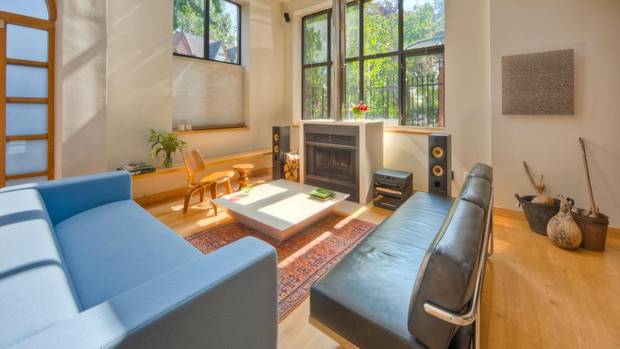 The 100-year-old building that now houses the Button Factory Lofts was occupied by workers in the garment trade, confirms real estate agent Christopher Bibby, but they were actually making uniforms, not buttons.

According to local lore, kids in the neighbourhood would visit the factory after school to see their parents at work. The children were rewarded with pennies in return for picking up buttons off the factory floor, says Mr. Libby of Sutton Group-Associates Realty Inc.

By 1993, most factories had moved out of the downtown core and the red brick building was rezoned for residential use. The builders reconfigured the building into four zones and sold the space raw so that the new owners could customize each area. Today, the building has 13 units.

Designer Parisa Manouchehri purchased the 2,400-square-foot unit at the front of the building 14 years ago.

“She has the whole facade of the building, the front door and the address,” says Mr. Bibby.

Ms. Manouchehri’s three-storey space takes advantage of the heavy fir posts and beams original to the factory. At the front of the unit, the weathered, wooden factory door now opens to a small, enclosed garden.

“With a lot of conversions, you don’t get exterior space,” Mr. Bibby points out.

In addition to the three outdoor areas, there’s a parking space next to the kitchen door.

Inside, the living room ceiling soars to 24 feet. The main floor provides living room, dining area and kitchen space in a mostly open area divided by a dramatic spiral staircase.

On the second floor, Ms. Manouchehri has created a home office with built-in bookshelves in the den. Doors lead to a large wooden deck. There’s also a master bedroom and a bathroom with a glass-enclosed shower and tub.

On the third floor, a second bedroom and third bathroom also have lots of windows and a skylight. Stairs lead to a roof deck at the level of the tree tops.

“It’s very private,” says Ms. Manouchehri of the deck, which is set above the rooftops of nearby houses.

She purchased the unit, she says, because of the huge amount of sun that streams through the large windows.

“I can’t live without light,” says the designer. “Having light on three sides of the building, it’s so open and airy.”

The building’s location, between Harbord and College Streets in Little Italy, means that it’s quiet at night but also close to bars and restaurants, she adds.

The spiral staircase that winds up for three floors through the centre of the unit is crafted of wood and stainless steel.

Ms. Manouchehri says the open stair lets light through to every level and also serves as a sculpture at the centre of the unit.

“Every day you’re reminded of this staircase as an art piece because of the way the light does its thing,” says Ms. Manouchehri. “It’s a house with spirit. It has architectural character.”