Home of the Week: An offer in 10 seconds on St. Lawrence Market condo 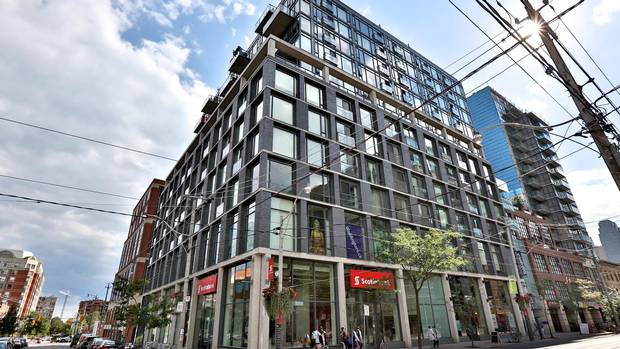 Laurence Reeves met her future husband while the two were on separate snowboarding holidays in Whistler, B.C.: She was from Toronto; he was from London.

After their meeting on the slopes, the two spent many hours on transatlantic flights.

Mark Reeves moved to Canada two years ago and the couple began looking for a larger place in the same St. Lawrence Market neighbourhood where Ms. Reeves was already renting a one-bedroom unit at 138 Princess St.

They planned to continue renting for a while so, when unit 413 came up for sale in the same building, they only dropped in out of curiosity.

“It took 10 seconds to go from ‘we’re renting’ to ‘we should put an offer in,’” recalls Mr. Reeves. “We fell in love with it straight away.”

The view of the CN Tower from the main living space was the first draw, but the couple also found the layout ideal for entertaining. Mr. Reeves liked the area, which reminded him of London’s East End, with its quirky neighbourhood pockets, cool bars and restaurants.

The couple has made only a few changes to the unit despite the arrival of their baby daughter, who is now 10 months old.

A former den was converted to her bedroom with the addition of an interior window. The room also connects to the semi ensuite bathroom so it makes a good guest room when family members are visiting, Ms. Reeves says.

The couple also reconfigured the interiors of all of the closets to create more hanging space.

The master bedroom has an ensuite bathroom.

The family spends lots of time in the main living space, which accommodates the kitchen, dining room and lounge.

A door from the living area leads to an exterior balcony.

Ms. Reeves says the width of the room makes it easy to hold large parties and dinners.

The “soft” loft at 138 Princess was built in 2009. The builders created an industrial loft appearance with large windows, interior walls and ceilings of concrete and exposed ducts.

“It is refreshing to have this kind of scale for a two-bedroom,” he says. “Even looking at houses, it’s hard to find a space this open for entertaining,” he says, pointing out that many semis are much narrower.

The Reeves visit St. Lawrence Market so regularly that they know many of the vendors by name. They also enjoy Sugar Beach and other parks.

“There’s nothing touristy about this place but every time we have people visiting we usually just keep them in the neighbourhood,” Ms. Reeves says.

They find that they seldom drive because they so rarely leave the community.

“We’re actually looking to give our car back,” Ms. Reeves says.

The balcony, which stretches across the width of the unit, also has a gas line for a barbecue.

When the couple first moved in, they enjoyed sitting on the west-facing balcony for evening cocktails, Mr. Reeves says, but now the couple spends more time out there playing with their daughter.

During the opening and closing ceremonies for the Pan Am Games in July, the couple had a clear vista of the fireworks exploding from the CN Tower.

“It was like we had our own private show,” Ms. Reeves says.