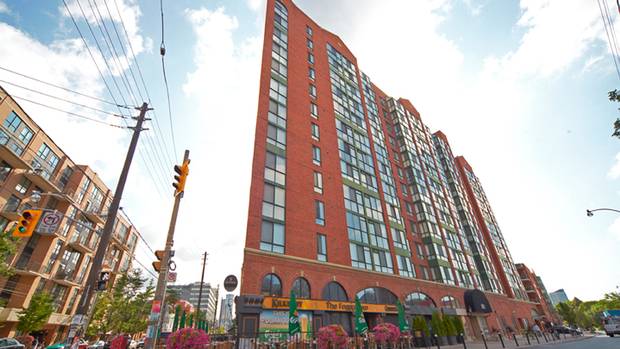 Many residential projects have popped up in King West in the past five years, but there are advantages to buying an older condominium, like this one-bedroom plus den suite, says agent Christopher Bibby.

Furthermore, this roughly 700-square-foot unit was built less than two decades ago with a den off the bedroom.

“You find in a lot of these new buildings that the dens are actually located more at the front of the unit,” says Mr. Bibby. “So the nice thing here is that this den was fully windowed from floor-to-ceiling, so you have a lot of natural light coming in and a spectacular view.”

Large windows also frame the vistas in the combined living and dining area. “We had a total unobstructed east view into the city, so we were overlooking the whole skyline with the CN Tower,” adds Mr. Bibby.

To freshen up the property’s interior, new ceramic floors were laid down in the kitchen, hardwood floors were installed everywhere else, and the shower was renovated in the three-piece bathroom.

The monthly fee of $449 covers the cost of utilities and maintaining common areas, which were recently modernized. Residents also have access to a gym, tennis courts and rooftop deck with a hot tub, barbecue area, picnic tables and a running track.

“A lot of the residents do take full advantage of this rooftop terrace,” says Mr. Bibby. “It probably offers one of the best views in the city.”