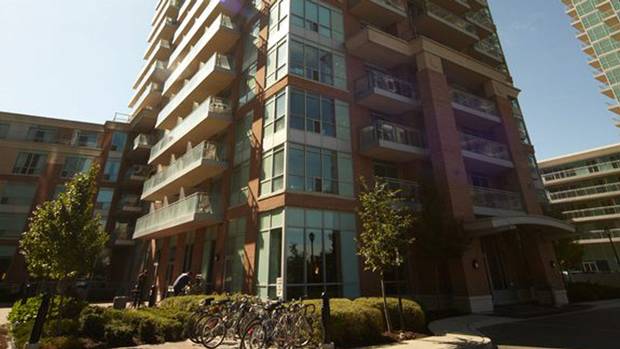 The Action: Three of the 30 visitors who toured this one-bedroom suite at Vibe condominiums returned on the second day with competing bids. The best offer was officially signed off a week later once the buyer received the condominium status certificate.

What They Got: In one of three buildings developed by Monarch Group in Liberty Village, this nearly 600-square-foot suite has some elements of a detached house with two floors, each with a bathroom, and a principal room with two-storey windows and a walkout to a 350-square-foot terrace.

Practical features include a walk-in closet in the loft bedroom upstairs, a movable kitchen island and six appliances, as well as a locker and parking spot.

The monthly fee of $296 covers the cost of heating and water, 24-hour concierge and recreational amenities.

The Agent’s Take: “It really did feel like a home, enough though it was one-bedroom,” agent Christopher Bibby says. “This is the only one-bedroom layout in the entire building that had a terrace of that size. Most of the other units have balconies typically 30 or 40 square feet, so this was almost like having a backyard.”

The design of the complex was also unconventional, but desirable. “Every building had a independent gym, party room and guest suite, but [the builder] gave each tower a unique addition that could be shared among all three,” Mr. Bibby explains.

“So one of them had a pool, another had a golf simulator … it was quite nice.”