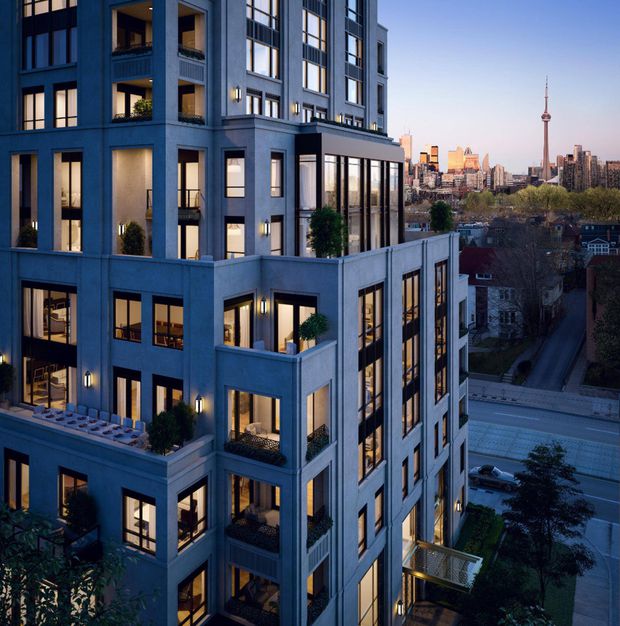 Architect Richard Wengle puts aside the architectural renderings in front of him to gaze upward at a deep twilight sky. He is standing beneath the cupola that tops the great room of his own Forest Hill home.

“We bring a lot of people here,” Mr. Wengle says. “They see what volume and space and light feels like.”

As the guests flow through the rooms and gather next to the pool, they experience first-hand the workmanship in the dome, the soaring ceiling heights and the heft of doors framed in black steel.

They’re also treated to the luxury of valet parking, fine wines and a tower of fresh oysters. All the while, celebrity photographer George Pimentel is capturing the revelry.

The private soirée serves as the unveiling of One Forest Hill, a 12-storey boutique condo building designed by Mr. Wengle. The developers from North Drive Investments Inc. are on hand and most of the invited guests are “family and friends” who will have the first opportunity to reserve a unit.

Despite the downturn in sales in the the Greater Toronto Area’s resale-housing market in recent months, new condo projects and housing developments still attract purchasers – sometimes in hordes. When the Residences of 33 Yorkville launched recently, the frenzy astonished industry veterans, who described buyers lining up for hours and lying on the floor to fill out sales agreements.

Homebuilding remains robust in Canada, the most recent data show, with national housing starts in September coming in slightly below August numbers.

Bank of Montreal senior economist Robert Kavcic says activity cooled in Ontario after strong gains over the summer, but the 12-month average is still running at the strongest level in more than a decade. Mr. Kavcic says the issue in the GTA is not a lack of supply but rather the composition of supply.

With lots of projects in competition, developers must have a laser focus on the target market.

North Drive partner Jordan Morassutti says One Forest Hill will likely draw people who already live in the area of St. Clair Avenue West and Avenue Road. Many buyers could turn out to be existing clients of Mr. Wengle and the project’s interior designer, Brian Gluckstein.

A third-floor unit with two bedrooms plus a den in 2,046 square feet of space is $2.5-million; a unit at the top, with views on three sides and 2,881 square feet of living space is $6-million.

In recent years, Mr. Wengle has designed many of the large, new houses that have appeared among the 1920s-era stone mansions of Forest Hill.

His portfolio includes extremely traditional and very contemporary designs, but his most established niche is in designing homes – such as his own residence on Russell Hill Road – that combine the principles of classical architecture with all of the amenities of modern life.

One Forest Hill will be built on the site of a former medical building. Another developer purchased the property and proposed a 15-storey tower, but opposition in the neighbourhood led to a scaled-down building with fewer units.

North Drive purchased the project on the condition that the new plan received approval at the Ontario Municipal Board. The current plan calls for 43 units in a 12-storey building, but the number of units may change if some purchasers ask for an expanded layout.

Mr. Wengle says the architecture is inspired by landmark art deco buildings in Paris, New York, London and Barcelona. Pedestrians will come and go through a covered entrance and materials such as marble, limestone and metal will fit in with the Forest Hill streetscape.

Mr. Wengle explains he deliberately moved away from the glass curtain wall that has become the hallmark of Toronto condos.

“We don’t want to do just a glass box. That’s not for here. That just doesn’t respect the neighbourhood.”

Instead, he set the building on a strong base, then used tiers to diminish the building’s impact on the street and neighbouring houses.

“The building starts to step back,” he explains.

The windows – punched into the exterior – emphasize the vertical lines.

“There has to be an order to it,” he says of the verticality. “Your eye and your gut are really the test.”

Each unit will be identifiable as a specific home, he explains, with private terraces and loggias of different dimensions.

“We literally sculpted the building,” Mr. Wengle says. “It has a lot of control, but at the same time, there’s a lot of randomness.”

Compared with some more traditional buildings, One Forest Hill will have the simple and clean lines that feel more modern, he says.

“Simple is very hard and you have to have a lot of confidence.”

A few of Toronto’s carriage-trade real estate agents are among the guests. One points out that denizens of Forest Hill who want to move to a condo in the same area don’t have a lot of addresses to choose from. She thinks people moving from a spacious home will find the boutique size appealing.

“They don’t want to be in a building where there are 400 units.”

She believes the opportunity to tailor the units will be important to clients.

“If you buy early enough, can you have a pool?” she wonders.

Christopher Bibby of Re/Max Hallmark Bibby Group Realty Ltd. says condo marketing has shifted along with demand in recent years. At one time, lavish sales events were popular because there was so much competition for purchasers’ dollars. Projects selling from plans before the ground had been broken were sold at a discount to market values.

“They wanted to tempt you to buy because you were literally lending your money to the builder to build a building.”

As more investors piled in, prices escalated and developers didn’t need to put much effort into the sales process. Often buyers would turn up to a trailer converted to look like a model suite.

In today’s market, Mr. Bibby says, “if you want to stand out, you can’t just offer some cheap bottled water and some photo copies.”

He says the proximity of One Forest Hill to Mr. Wengle’s home should be reassuring to buyers. He would feel confident knowing the people involved in a project intend to buy a unit for themselves or live nearby.

Many developers, he points out, live in far-off suburbs and never plan to be within walking distance of the project.

Instead of opening sales centres filled with people running around with clipboards, Mr. Bibby says, builders should try to humanize the buying process.

He adds that developers can command a premium for units in the preconstruction phase, based on the assumption that the value will be higher by the time the project is completed. He advises buyers to be discerning when prices are so lofty.

“Given where we are today and what the builders want for the inventory, if you’re going to pay more than market value today, it better be good or it better be different. Who knows if we’ll have the same upside in the coming years.”