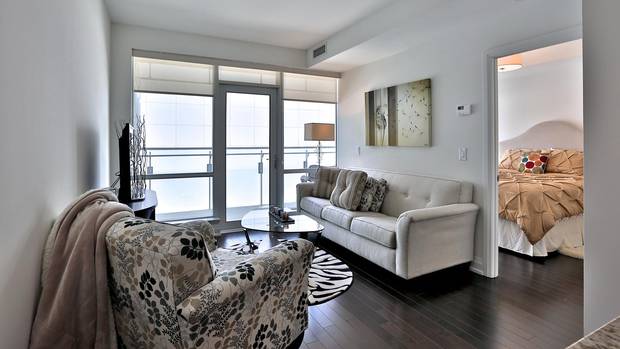 Days on the Market 14

The Action: The Toronto International Film Festival’s headquarters and theatres anchor the Festival Tower where about 15 homeowners were offering their suites for sale late March. Despite the competition, this one-bedroom-plus-den unit quickly scored a deal after 12 showings.

What They Got: On the 12th floor of a fairly new high-rise, this 674-square-foot unit was designed with an open entertaining, dining and cooking space with hardwood floors, sleek kitchen cabinetry and Miele appliances along one wall, as well as a wall of windows and door to a 119-square-foot balcony.

Tucked out of view are laundry facilities and a bathroom between the den and master bedroom with his-and-hers closets.

The unit also comes with a locker and monthly fees of $578 to pay for water and heat, concierge, guest suites, gym, indoor pool, media and party rooms.

The Agent’s Take: “The building itself has a lot of amenities, there is a theatre, beautiful state-of-the-art gym and it’s connected to TIFF Bell Lightbox,” agent Christopher Bibby says.

“[Plus] they had this beautiful landscaped meditation garden directly in front of their suite, so it was an incredible view and it was quiet. It’s not something I’d seen before.”

This unit’s layout was also unlike most with a den off a short corridor by the entrance. “As a design, I thought it was brilliant, there wasn’t a lot of wasted space,” Mr. Bibby says.

“The den was tucked off on its own and connected to the washroom and front foyer, so it was secluded from the kitchen, living room and bedroom.”