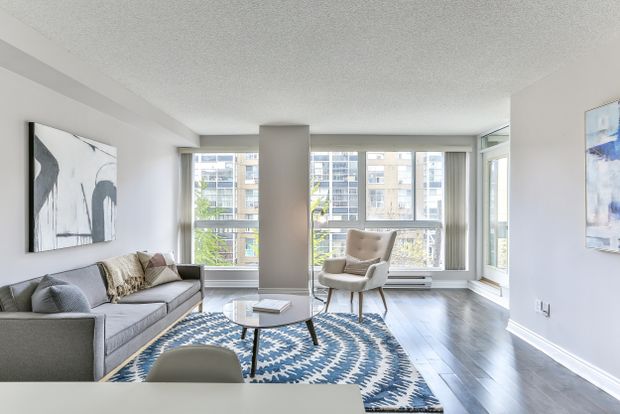 Next to the football field of North Toronto CI, the Broadway Plaza only offers rental parking to its residents, so this one-bedroom suite came with an extra monthly fee of $150 for its spot. Three dozen shoppers still made their way over for a tour mid-November.

“Someone had made an offer a couple days in so we decided to let it pass, and then we ended up working with the second offer that came in,” agent Christopher Bibby said.

“Given the state of the market, it sold in fairly average [number of] days.”

This third-floor unit is flooded with sunlight through full height windows and a solarium that has walkouts from the bedroom and open living and dining area.

Monthly fees of $651 cover water, concierge and use of a gym, indoor pool and rooftop deck.

“For under half a million, it’s extremely difficult to find anything in the city, especially with proximity to transit and being right at Yonge and Eglinton,” Mr. Bibby said.

“And it’s fairly big for the price, too. It’s just over 600 square feet. Typically downtown for this price point, you’re getting about 500 square feet.”