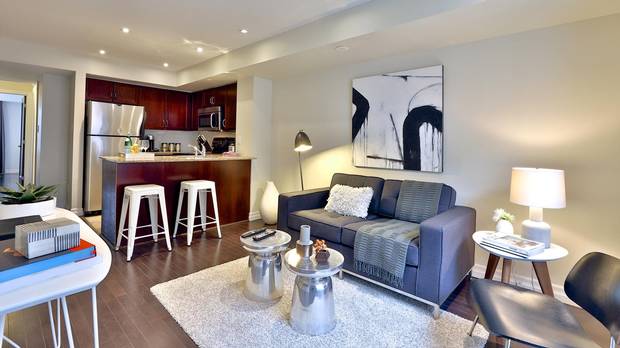 DAYS ON THE MARKET Five

The Action: In mid-March, the King Towns complex had no vacancies save for this stacked two-bedroom townhouse. The rarity allowed it to stand out and helped bring in seven serious offers, pushing the sale price into the mid-$500,000s.

What They Got: What appears to be traditional townhouses are actually stacked units of various configurations. This roughly 700-square-foot suite is all on one level with windows on the northern and southern ends, as well as a Juliet balcony off the living room and larger outdoor space accessible from a secondary bedroom.

There is hardwood flooring and stainless-steel kitchen appliances. The master suite has a walk-in closet.

Alterations to this unit also gave it some panache. “My clients originally had a two-bedroom plus den [plan], which they converted to two bedrooms, so it was a really unique one-off layout. And they had also done other renovations to the place,” Mr. Bibby states.