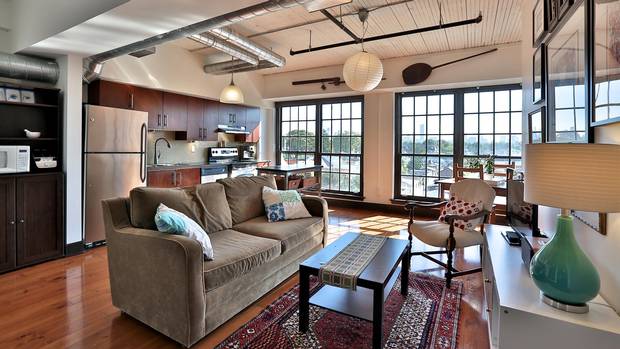 The Action: There’s rarely a shortage of people waiting to buy at the converted bakery now known as the Argyle Lofts. This two-bedroom unit took in 16 visitors on its first day on the market and two offers were on the seller’s table to review by the next morning.

What They Got: The century-old bakery/warehouse once owned by John Dempster was converted into lofts about eight years ago. This more than 770–square-foot suite on the fourth floor has 14-foot ceilings and timber posts and beams complementing new hardwood floors.

There are two bedrooms, a four-piece bathroom and laundry facilities, while the living, dining and cooking quarters are open concept along the east-facing windows.

The unit has a locker and monthly fees of $467.

The Agent’s Take: “If you’d like to be in a conversion in that area, that [building] is the only option,” agent Christopher Bibby says. “It’s such a beautiful building, the reserve fund has been built up quite steadily based on the condo corporation renting out the building for films.”

Thus turnover in the building occurs maybe two to four times annually. “Typically the one-bedroom-plus-den, one-bedroom and even smaller two-bedrooms – like ours – they rarely ever come up because the price point is a lot more attractive to a larger group of buyers,” Mr. Bibby says.