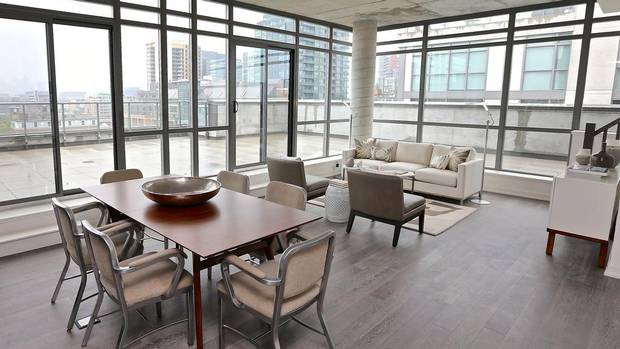 The Action: In a new boutique mid-rise across from the Gladstone Hotel, this two-bedroom corner penthouse was professionally staged to woo style-savvy buyers. Nearly half of the dozen visitors contemplated whether to make an offer, but one formally registered a bid signed off at $780,000.

What They Got: At the top of the second addition to a three-building development with street-level retailers and pedestrian-friendly walkways, this 1,120-square-foot suite was designed with two levels of living space and an 800-square-foot terrace with south and eastern exposures.

A wall of windows and sliding patio doors brighten the living and dining areas, which had a space the builder left empty for the original owners to install custom cabinetry and built-in appliances, including a gas stove.

The second floor is divided for laundry facilities and two bedrooms, including one containing the largest of three bathrooms.

Conveniences on lower levels include a locker and parking, as well as a party room that is covered by monthly fees of $618. Hydro is extra.

The Agent’s Take: “Nothing in either of the buildings – 2 and 8 Gladstone – had gone for sale in this size,” says agent Christopher Bibby. “It was a two-level unit with two bedrooms and three bathrooms, so it really felt like a home.”

Even the outdoor space was substantial in size and scope. “It has an 800-square-foot terrace, which is larger than most backyards in the city, and you had an unobstructed view into the downtown core,” Mr. Bibby said.

“That whole pocket is low-rise retail and mid-rise boutique buildings, so you don’t have any high-rises in the neighbourhood.”