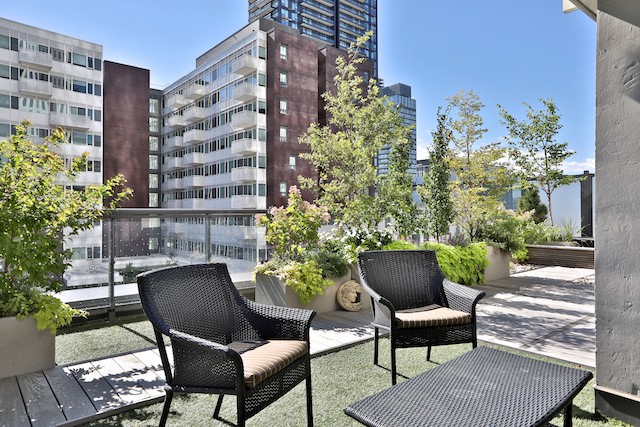 Watch out, world! Looks like Regent Park is the next up-and-coming neighbourhood. Back in May, a condo in the east end sold for $1 million for the very first time.

The three-bedroom unit at 55 Regent Park Blvd. was on the market for just 21 days. It then sold for $1,044,500, which is just $80,500 shy of its asking price, the Globe and Mail reports. The price point is pretty remarkable considering the same condo sold for nearly half that ($553,717) four years earlier.

Condos make up 92 per cent of sales in Regent Park, according to GTA Homes. The average condo price in the area this past year was $411,792.

So what makes this condo so outstanding? Besides the fact that the corner suite has three beds and two baths, it also has a wraparound terrace that’s nearly the same size as the unit itself.

Four sliding doors open up to the 1,100 sq. ft. balcony, which faces south and west. The outdoor space was fully renovated by the seller, who was an avid gardener, agent Christopher Bibby told the Globe. Besides greenery, the mini balcony oasis now includes “Brazilian Ipe decking, concrete board planters, irrigation and lighting systems and a waterfall.”

The suite itself gets a lot of natural light thanks to the floor-to-ceiling windows, and the upscale interiors are a definite selling point.

“People didn’t expect to see something like this in the area,” Bibby told the Globe. “There were some generic one-bedroom and one-bedroom-plus-den units [listed at the time], but nothing of this calibre. And this was the only one with a terrace.”Regent Park has come a long way since its 1940s origin as a public housing project. In 2006, the Toronto Community Housing Corporation (TCHC) worked with the City of Toronto to launch a revitalization project to transform the neighbourhood’s “aging housing infrastructure into a successful, mixed-income, mixed-use neighbourhood.”

Phase 3 of the revitalization project is expected to be completed in 2021.