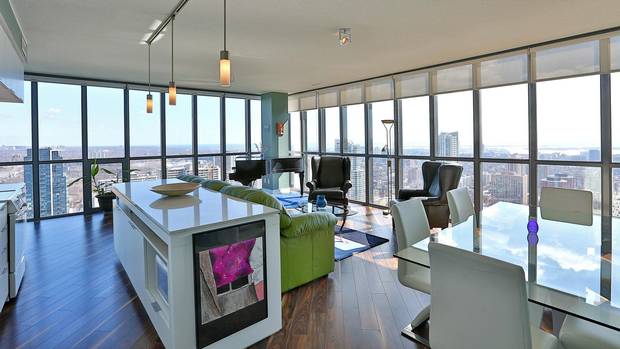 The Action: Early this summer, this two-bedroom-plus-den suite at X Condominiums was listed at the same time as a near-identical unit directly below that had an extra parking spot. Yet it logged nearly 30 showings and sold the same week as the one below did in July.

What They Got: At the southeast corner of a 44-storey tower, this 1,451-square-foot unit is designed around an open entertaining space with hardwood floors, a cooking station tucked behind an island, walls of windows and access to one of two balconies.

Enclosed is a carpeted den and two bedrooms – both with bathrooms and the larger also with a walk-in closet – as well as a third bathroom and ensuite laundry facilities.

Parking completes the unit, which has monthly dues of $899 to cover costs of water and heat, concierge, party and fitness rooms, outdoor pool and rooftop deck.

“The living and dining space had a great feel, very open, airy and bright … It was a beautiful space.”

The unit’s size also made it easy to enjoy the sights. “The majority of the suites selling are under 1,000 square feet, and we were 1,451 square feet, so we were considered one of the largest spaces in the building” Mr. Bibby says.

“There are only about 10 of these particular floor plans and a lot of the owners are original owners.”