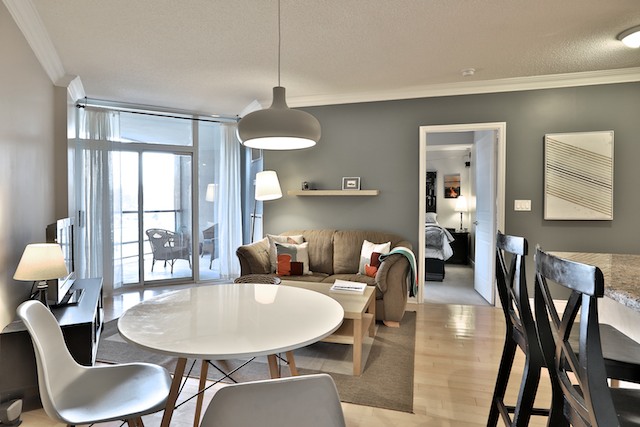 Days on the market: Two

This one-bedroom-plus-den suite sold in two days late January. According to agent Christopher Bibby, that feat came quickly after the irregular shaped principal room was given more complementary furnishing than it had during a two-week stint on the market just prior.

“It was an interesting experiment to witness how people react to furniture placement and staging,” Mr. Bibby said.

“It ended up being the highest sale for a one bedroom plus den in the building. And given the market conditions, we were prepared to do a little bit of negotiating.”

This 15-year-old unit has a modern design with an enclosed den and bedroom on opposites sides of the kitchen and living room. The former also features granite counters and the latter sliding doors to a balcony.

Laundry facilities, a locker and parking complete the unit’s assets. Monthly fees of $563 cover the cost of water, heating, 24-hour concierge and operation of fitness and recreation rooms.

“Yonge and St. Clair is undergoing a full revitalization, so the entire intersection is being transformed.” said Mr. Bibby, who cites the proximity of new amenities, from Loblaws to Buca.

“So it’s a lovely building in a great location, and having the subway and new grocery store, made it appealing.”

Buyers also appreciated this unit’s treetop vistas of midtown. “The view was unobstructed, west-facing over the homes along Heath Street,” Mr. Bibby said. “And it has a deep balcony that made it more appealing than your typical 40- or 50-square-foot balcony.”