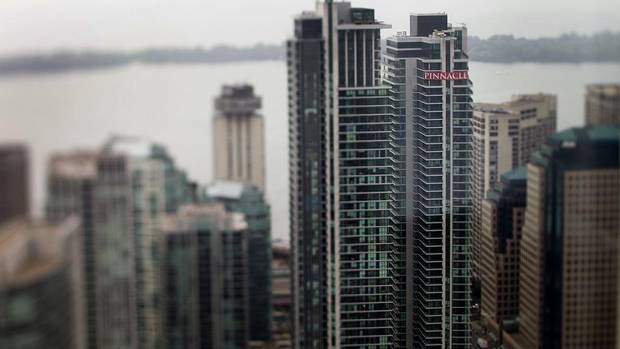 With high-rise inventories up, a new freedom to choose

People who are shopping around for a condo unit to buy in Toronto have lots to choose from these days.

Gleaming new buildings such as Clear Spirit in the Distillery District, Market Wharf near Front and Jarvis, and Charlie near King and Spadina have brought fresh supply to the market recently.

Agents say the market for single-family houses is still moving along quite well, but condo units are taking longer to sell.

Mr. Bibby says the buyers are still out there, but he has noticed recently that the volume of showings has also slowed – especially compared with the spring.

“Buyers are just in no rush,” he says. Mr. Bibby recently sold a condo with two bedrooms and two bathrooms in a downtown building that’s considered highly desirable. It took three months to sell because there were 10 other two-bed, two-bathroom units for sale in the same building.

Economists at Capital Economics say housing starts in Canada have risen noticeably over the past six months or so because multi-unit buildings planned years ago are now under construction. But, the economists point out, housing starts are a lagging indicator of housing market conditions. They expect housing completions to drift higher over the coming year as more towers are ready for the first residents to move in.

Geon van der Wyst of Royal LePage Real Estate Services Ltd. says one of the most difficult issues for agents right now is persuading sellers to accept “the new reality.” With so much competition, he says, condo sellers have to be very careful not to set asking prices too high. Buyers are looking for what they perceive to be good value, he says, and they won’t even come forward with a low-ball offer if they think an asking price is too rich.

Mr. Bibby points to the example of the coveted DNA lofts at King and Shaw. In the past, agents would set an offer date and wait for multiple bids. Last spring a one-bedroom plus den was listed with an asking price of $379,000. It sold after four days for $420,000.

More recently Mr. Bibby says, a unit with the identical layout was listed for $399,000. It sold after two-and-a-half weeks on the market for $10,000 below asking.

“I feel the buyers are in the driver’s seat right now.”