A true loft, with custom interiors 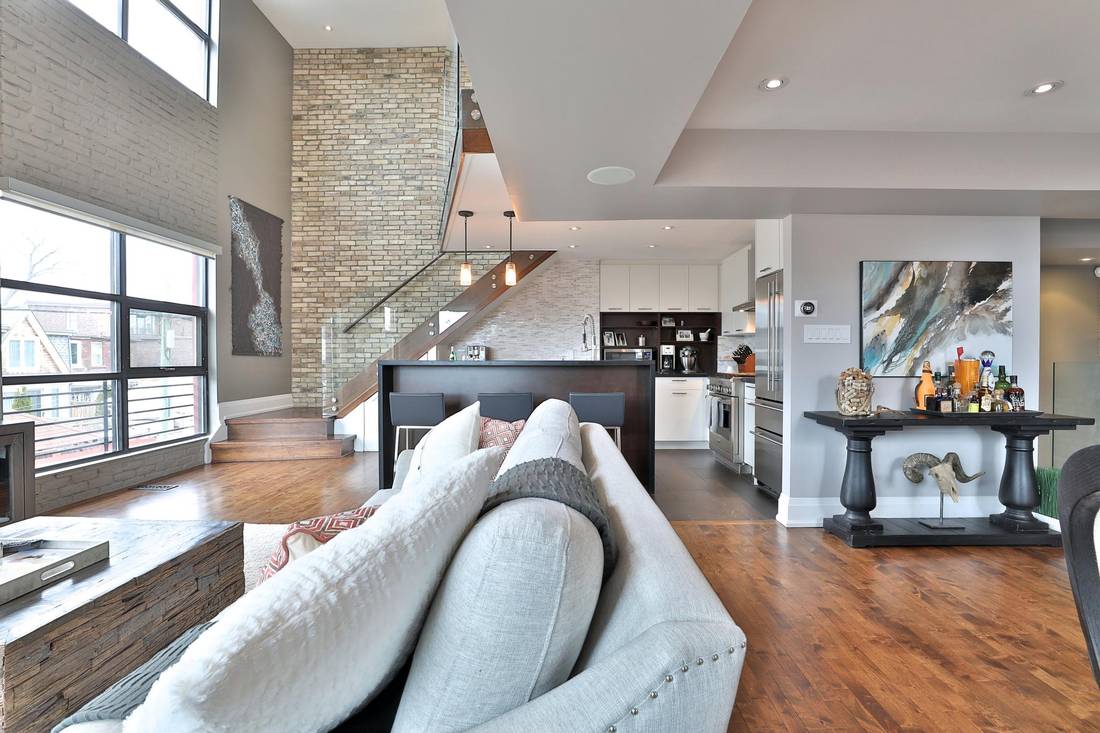 By the 1990s, most of Toronto’s factories had moved out of the city and the brownfields – or former industrial lands – were moribund. But developers were finding that converting these old brick buildings into fashionable lofts was a sure way to draw the young professionals and creative types who wanted to live in unconventional places in the downtown core.

As part of that revitalization, the building at 200 Clinton St. was rezoned for residential use.

Clinton Street north of College Street had long been a neighbourhood of immigrants from Italy and other European countries who lived in the area’s Victorian rowhouses and semi-detached dwellings. Many neighbourhood denizens worked at the garment factory, where they sewed uniforms all day. The workers’ kids could sometimes earn a few pennies by helping to clean up the factory floor.

In about 1993, the developers incorporated the old structure into 13 raw spaces that the buyers could have customized to their own taste. The project was dubbed the Button Factory Lofts.

Mr. Bibby says the project is unusual because the original owners were given so much free rein.

“It’s such a collection of small, one-off buildings,” he says.

It’s also rare to find a “hard” loft, which has been created from a 100-year-old structure.

In 2012, Jason and Krista Furlano were planning their wedding and losing out to competing bidders as they attempted to buy a house. The couple was interested in the east-end neighbourhood of Leslieville, but when they had no luck there, they gradually became more open to different neighbourhoods and property types.

The two both grew up in traditional suburban homes, so the first time they saw the 1,540-square-foot unit tucked away at the rear of the Button Factory Lofts, they had a hard time visualizing it as a home.

“It was vacant. There was nothing we could get our heads around,” Mr. Furlano says.

Still, they liked the quiet setting on Jersey Avenue, hidden away from the busy street life of College Street and Little Italy. The unconventional space has exposed yellow brick, a soaring ceiling and a dramatic staircase in the centre.

The door to the rooftop terrace is visible from the main living space. There appeared to be lots of room for entertaining in the main living area, which sits just above the rooftops of garages in the rear laneway. The loft is set apart from nearby houses but the view maintains a connection to the neighbourhood around it.

“It really feels more like a townhouse than a loft,” Mr. Furlano says.

Once they purchased the loft, the couple discovered that Mr. Furlano’s great-uncle still lives in a house right across the street. The Italian immigrant had made his living in the garment trade. The first time he came to visit, he was astounded that his young relative was living in the converted factory where he used to work, Mr. Furlano says.

The couple find it easy to accommodate family in the large combined living room, dining room and open kitchen.

“We had 16 people for Christmas dinner,” Ms. Furlano says.

The loft had originally been built with two bedrooms but a previous owner had reconfigured the space to have one bedroom and a study area. The steep and narrow stairs that led to the rooftop deck were replaced with a more substantial staircase that matches the style of the main stairs. Now the view from below is open all the way to the top of the unit.

“I think that’s the first Instagram we ever took,” Mr. Furlano says of the wood-and-glass staircase.

The couple made a few changes after they moved in, including removing some trim and painting over some very bright colours. They also replaced all of the light fixtures. A massive pendant light now hangs from the peak of the living room ceiling, which is 18 feet high.

Workers had to build scaffolding so that two electricians could climb high enough to install the fixture.

The Furlanos enjoy the quiet setting – especially after living in a high-rise tower downtown.

The rooftop terrace is one of only three in the project so the space feels like a secluded haven.

Mr. Furlano says the new staircase makes it easy to carry food and furniture to the terrace. It’s also easier for elderly relatives to make the climb.

There’s a barbecue, lots of space for lounging, and views across the city to the CN Tower.